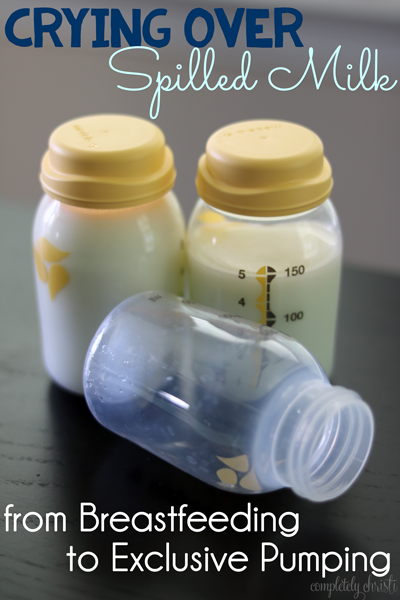 I never thought I’d be talking about my boobs on the internet, but here it goes. My husband and I joke that we pretty much learned to be parents from our friend, Google. It’s especially true for me when it came down to breastfeeding. Let me tell you friends, it was hard. My late night internet searches ended up being exactly what I needed, so I’m hoping that by sharing my journey it can help someone else too.

When I was pregnant, so many people asked if I’d be breastfeeding. And I’m not talking about my doctors. When I said I was going to try, the results were mixed. Some quickly assured me that formula was just as good and their kids turned out fine. Others told me to prepare myself for endless days of leaky boobs and bleeding nipples. Yay. When I confessed to one friend that I was toying with the idea of exclusively pumping, she promised me that I’d change my mind for the convenience of “from the tap” feeding.

Then Carter was born two weeks early via induction, and I realized just how unprepared I was. It took about 45 minutes from the time Carter came out until the time I got to hold him. When I finally did get to hold him, I did not have that initial gush of maternal feelings. I mostly just felt tired, jittery, and hungry. I looked at my husband holding our son with tears running down his face {the same man who didn’t even shed a tear at our wedding} and I just felt… nothing? It’s hard to explain. Carter was so cute, and his hair was so soft, and he smelled like a heavenly little baby. But the two of us didn’t really get the glowing crawl to the boob moment that was “supposed” to happen during skin to skin.

Enter stage right… the nurse who had given Carter a bath while I was being put back together. She proceeds to squeeze my nipples like nobody’s business in search of colostrum while perching Carter’s mouth on there like a baby bird. With mild success, he drifted off to sleep and I finally got something to eat.

After that, Carter didn’t show much interest in nursing. He would suck on his bottom lip or his tongue instead of latching. During the next 24 hours, I would meet with two lactation consultants a few times. They could get him to latch, but again he’d stop shortly after and suck on his own tongue. I wasn’t able to express much milk on my own either, but they assured me it would come in and to keep trying. We dutifully tried to nurse and charted the time Carter spent on each side throughout the day. I wasn’t convinced he was actually drinking anything, but newborns have tiny stomachs and he had enough wet/dirty diapers so no one was worried. The pediatrician told us that we might be told that Carter has lip tie by one of the consultants, but he assured us everything was fine and Carter would catch on.

However, by Carter’s second full day we started to get worried. He hadn’t eaten much after his circumcision, which they told us was totally normal. But when checked, his blood sugar was down and he only had two mildly wet diapers overnight/through the morning. After consulting the pediatrician again, we decided to try formula. And let me tell you… that kid sucked down almost all of the 2 ounces. It resulted in another night in the hospital, but his blood sugar was back up and he was moving urine again. For the first time, I cried my eyes out. I had been starving my baby. I know you hear “breast is best” but in our case, FED was best.

I was still determined to get Carter some breastmilk though.  So during our last day in the hospital, we consulted with lactation consultants again and also tried to pump. I got nothing. Zip. Zero. Zilch. They told me to keep trying and that it would get easier once my milk finally came in. With that, we were on our way home with bags full of formula samples.

Over his first week at home, we continued to try to nurse without any success. I did begin to get some milk when pumping though. I was lucky to get an ounce total all day, but we’d give Carter whatever I had pumped first and then top him off with formula. By a week after delivery, I was pumping 3 ounces a day. My right side was primarily the one producing, so my body was only doing half its job. The lactation consultant called to check on our progress. I told her I had switched to exclusively pumping for our sanity and that I was supplementing with formula. She said it was totally normal and that many women only had one side that produced well. I was pumping every 2-3 hours, drinking water like crazy, and also trying Mother’s Milk Tea. So she said it sounded like I was doing everything I could and wished me well.

The end of the first week home is when things got the darkest. Guests would visit and say things like, “You’re giving him a bottle already??” or “Why are you using formula too?” Um… because my baby would be starving without it. But instead, I just cried. And pumped. And cried. My husband would go to sleep after feeding Carter in the night, and I’d still be up pumping away long after they finished. When the bottle tipped over and we spilled milk, I sobbed. Every drop felt like gold. While my supply DID increase, I couldn’t stay ahead of Carter’s needs so we were still supplementing.

We were doing 50/50 milk to formula by the time Carter was two weeks old. The pediatrician made me cry when we had Carter’s 2 week checkup. His first question was how I was doing. He didn’t judge me for formula and told me that Carter appreciated everything I was trying, even though he couldn’t tell me himself. Carter had gained weight as expected. We were doing just fine.

By three weeks, my supply was finally catching up to his needs and I was just trying to stay one bottle ahead of him. We tried nursing again, but he still had trouble latching without sucking on his own tongue. So I accepted that I was just one of those exclusive pumpers and pumped 7 times a day. Around this time, I discovered lactation cookies that worked so much better than the tea and didn’t upset my stomach. Finally, finally, finally my supply was established and we were able to stop using formula altogether by Carter’s 2 month checkup. I was also able to reduce the number of pumps per day to 5, which meant sleeping through the night again.

It wasn’t until 10 weeks that I was able to begin storing some milk. While I’ll probably never have a freezer stash, I’m pumping on average an 4 extra bottles each week. Even though pumping is still hard and far from convenient, I’m glad I stuck it out. I questioned if it was worth it when I was getting just a few ounces per day. Our goal had been to breastfeed for 1 year, then I changed it to 6 months, and finally I had hoped just to make it to 2 months when Carter got his first round of shots. We’ve now passed that milestone and I’m feeling pretty good about it. I don’t know how long we’ll make it, but I know that I’ve done my best.

No matter how you feed your baby, be gentle with yourself and shut out those people who tell you it’s not good enough. Carter is a chunky, happy, thriving little man and he doesn’t care that he drinks from a bottle instead of a boob.

What has helped me exclusively pump:
–good quality pump (I use the Medela Pump In Style Advanced)
-correct flange size
-spare parts so I don’t have to wash bottles, collection jugs, or flanges all the time
–sterilizer (yes, the dishwasher CAN do it but it’s much easier this way)
–bottle warmer (again, for convenience)
–Boob Ease
-sticking to a schedule (pump as frequently as baby eats to establish supply)
–lactation cookies (I’ll share my DIY recipe soon)
-sleep (5 hours at a time really helps your supply)