Things are still moving along with the house! We’re about a month behind our original projection, but crossing our fingers we’ll close before October 20th, when our interest rate lock expires. We were initially projected for mid-September so October 20th felt like a safe date. Now I’m a tiny bit nervous, but full steam ahead. 😉

We had our pre-drywall meeting on Monday. It was a chance to walk through the house with our PR and make sure everything looked good before closing up the framing. For the most part, things looked great. I finally remembered to have Ryan snap a picture of my office, which is my favorite room in the house. I’m so glad I opted for the 4 foot extension. Can’t wait to see the double doors installed! 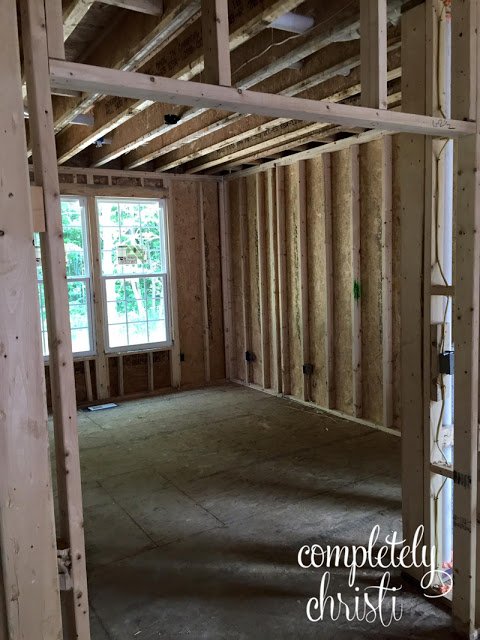 Overall, we left with just a small list of changes.

I don’t know if you remember my previous Guardian post, but they continue to be a little difficult to work with. The living room wall speakers were wired outside the living room windows instead of inside. Not a big deal to move over at this point, so my husband called our rep to let him know. I guess the installer didn’t want to come back out and fix it because he told our rep that he had to install the speakers outside because the studs inside were too narrow. Definitely not the case because the studs inside were wider than the ones outside. I don’t really care either way, but for sound quality blah blah they are supposed to be so many feet off center. It’s not something that you can change after they’ve been drywalled and we opted to upgrade to these speakers for sound quality and aesthetics, so it needs to be right. Hoping that’s fixed next time we’re out there!

They had delivered the brick, so I’m excited to see the outside of house start to take shape too.